Took the week off to have Turkey Day with the family, as everyone did. Turned out, the best moments weren’t with the family, but on my own. That’s okay, it still came down to family in the end.

Of course we all do the same thing on the third Thursday of November — haul our immediate families somewhere to hang out with our extended families — but I wonder if we all have that “Wait, why did I do this again?” moment at some point, too. There really was no crazy moment this year, no political brouhaha, and generally it was a lot of fun. Maybe it was the general hubub of the house — I grew up, for much of my life, with only my mother in the house — or maybe it was just contemplating what I figured would be a terrible drive home on the 101, but the question still occurred to me.

Maybe I wondered “Why?” when I was hanging out by myself and enjoying myself, something I could have more easily done at home. A large family actually allows you to disappear into whatever you find interesting, though. There I was on Friday — one part of the family got an early start home, one group went shopping, one group was watching football — and I was alone. On the porch. Reading In the Garden of Beasts by Erik Larson. For like four hours. And everyone was fine with it.

You know how long it’s been since I read a book in the sun, alone, for four hours? I don’t.

Despite the subject matter (a (mostly) non-fiction account of an American ambassador and his family in pre-World War Two Germany), I thoroughly enjoyed myself. The dappled sunlight warmed different parts of my body as the sun traveled past the maple and then the weeping willlow, the temperature was right, the book was interesting, and the odd sounds of dogs barking and children playing at the next house over provided the right kind of soundtrack. Restful and relaxing.

Later, I watched a college basketball game by myself. This is not, by itself, an amazing thing. But, since I had left my computer in the bedroom and didn’t feel like alerting one group at the house to my presence, I stayed in the room and watched it without my computer. I actually watched Stanford take on Syracuse in the championship, with almost all of my attention. (Okay I tweeted twice.)

It says a thing about the modern work environment that this was a surprising moment. Or, at least it says a thing about my present work environment — my living room. I write while the television is playing some sporting event, sports news show, or political update, and I pay just a little attention to the screen. (“I’ll stop writing when I hear them get excited about a play. I’ll watch the replays. Then I’ll probably tweet about it.”)

Watching with all of my attention was strange, but also enjoyable. Former Duke guard Johnny Dawkins‘ Stanford squad played stingy defense and scored just enough to keep the game within a basket or two through three quarters of the game. Syracuse looked overhyped, even with their great foward, Fab Melo, and some seasoned guards. Stanford was getting offense from unexpected places. The game came down to the final minute…

Then fifth-ranked Syracuse took over the game and scored 15 of the last 18 points to snatch victory (and the Pre-Season NIT Championship) from the Stanford squad.

Or maybe this sandwich had something to do with enjoying the game despite the result: 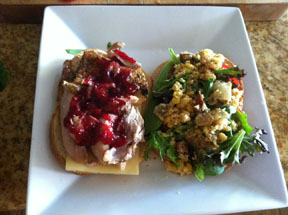 It was a little dry around the edges, but those edges allowed me to enjoy the middle, which was like biting into a crunchy-crusted turkey dinner (and all the smiles that came with that dinner) all at once. The drippings mixed with the sauce and the fresh tomatoes and the cranberry in such an interesting way…

Family (extended and immediate) is a great thing, even when they are difficult (or terrible, in any given moment). Taken as a whole, your family experiences will run together like tomato, mayo, cranberry, turkey and sourdough and create the wonderful experience that is life (or a sandwich). Even when you’re enjoying yourself alone, it’s part of the tapestry created by your family.

So that’s what I’m thankful for this year.

I write. About baseball, mostly, but also about the anthropology of sports, travel, cooking and sometimes music. But yeah, baseball mostly.
View all posts by enosarris →
This entry was posted in Basketball, psychology, sandwiches. Bookmark the permalink.